I got myself a Terratec S7 because my existing Cynergy S2 card started to show problems, and the situation is not resolved yet, mainly because the S7 does not appear to control the dish as it should in the PC I want it to run.

To figure out where exactly the problem is, I took the S7 and tried to install everything on a separate laptop, not contaminated by previous installations of any TV software 😉

I got the latest drivers for Windows 8.1, and of course DVBViewer, which superseded Terratec Home Cinema, well-known from the S2 installation.

I installed the drivers, but did not immediately notice that the installation had failed. Only when DVBViewer presented an empty list of supported hardware, and after installing the drivers again, I realized the failure (there is no visual clue as to whether installation was successful or not, you actually have to *read* *text* 😉 ).

which hints at a certificate validation error (hint, hint).

The Device Install Log at C:\Windows\Inf\setupapi.dev.log was also rather clear on the issue:

Since 64-bit Windows requires device drivers to be signed, this seemed to be a show stopper. However, you can disable signature verification by typing (in admin mode)

which fortunately worked on my laptop.

After reboot, I was able to install the drivers, and Windows even is so nice as to warn you if you install unsigned drivers 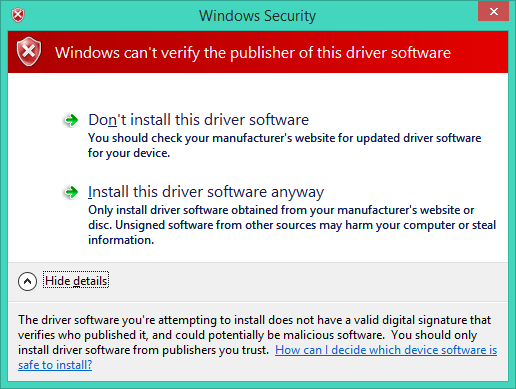 (There is probably an alternative method by extracting certificates from the installer’s .cat files, but I didn’t have to try, so I can’t tell.)

Starting up DVBViewer again, it immediately recognized the S7, and a range scan found several hundred channels fine. I switched to a couple of channels that I also had on my TV, but there was no picture.

Forum talk mentions this issue, along with LAV filters, which I had come across earlier clicking through the files of the Home Cinema download page. So I downloaded TERRATEC_Home_Cinema_Codec_Patch.exe from there, installed it, and finally got a TV on my laptop.

This site uses Akismet to reduce spam. Learn how your comment data is processed.